Okay, I know I’ll probably get flamed for this, but I think it’s something that needs to be discussed. I know it’s discussed every hunting season by at least one Outdoor magazine and in every Gun Shop and in every Deer Camp. 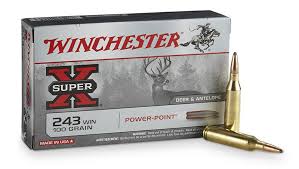 The simple answer is Yes…and…No.

First of all, the 243 is a necked down 308 that uses a .24 caliber bullet (6mm). As everyone knows, the 308 is a great round for Deer and other Big Game. That doesn’t make all of its offspring great Deer rounds though!

I’ve owned a .243 and a 6mm. The 6mm was a Ruger 77V and was without a doubt the most accurate rifle I ever owned. But I only used it for Varmints and never once tried it on Deer sized game.

I overheard some folks ask, how far will a 243 kill a deer? Well, I did use a 243 with 100-grain bullets one year to take a small buck at about 60 yards. He was feeding along, calm and perfectly broadside. Without a doubt, it can go as far as 180 yards.

The shot was perfect double lung and he leaped forward at the shot and piled up 50 yards later. Not everyone has had the same experience with this round.

In the past, the 243 suffered from poor bullet construction. Sometimes the bullets blew up on impact, sometimes they didn’t expand at all while other times they did exactly what they were supposed to do.

Bullet construction has come a long way over the years, but I still do not consider the 243 an ideal Deer cartridge, especially for beginners. Deer hunters can improve the performance of the 243 by reloading the round with premium bullets.

Sadly, the 243 Winchester is what beginners are handed a lot of the time as their first Deer rifle.

When the 243 Is Not Right For Deer Hunting

One of the problems I see now is beginners headed out to the field with the light 55 to 85 grain loads for the 243. Most of these loads have fragile bullets as they are intended for thin skinned varmints, not a tough old ridge running White-tailed Buck Deer.

Part of the problem is that so-called ‘experts’ behind the ammo desk and Gun writers are pushing these rounds on unsuspecting Deer hunters because they think lighter and faster is the way to go.

Another problem is that if you’re not practicing regularly, you may not be as familiar with the rifle as you should be. Many beginners (okay, most) will get a terrible case of “the shakes” when it comes down to the moment of truth when that buck deer comes into view. Heck, even most of us old-timers do! The difference is, those of us who have hunted for years and are experienced, have learned how to control “the shakes” and focus on the shot.

A poor hit on a Deer is made even worse when using a small bullet in a round like the 243. The extra damage caused by a .26 or 7mm caliber can mean the difference between finding a marginally hit animal or not.

In my opinion, the minimum caliber that should be allowed for Deer hunting is the 243 with a 95-grain bullet. I can’t believe the States that allow 22 calibers to be used for Deer.

Yeah, I know they’ll kill a Deer but so will the 22 Rimfire and even the little 17’s. Why not allow them to be legal rounds to hunt Deer with? Having said this, it doesn’t mean I think the 243 should be used by beginners.

To me, the 243 is to Deer rifles what the 410 shotgun is to wingshooting. Sure, it will get the job done, but it’s not for beginners!

How many of you that consider the 243 the ideal rifle for beginners would consider the 410 ideal for beginners to use Goose or Turkey hunting? Even though the 410 is used every year to take both, I don’t know anyone who would put 410 in the hands of a new hunter when going after those two birds.

The fact of the truth is that the margin for error is nil when using a small caliber like the 243. Everything has to be just right and everything, including the bullet, has to do its job. There are other low recoil rifle rounds that give you extra “knock down” than the 243 Winchester round. (FYI: this is no measurement of “knock down” power, just of .ft .lbs of energy)

Speaking of bullets again, if I were going to be hunting Deer with the 243 Winchester, I’d choose either the 95 and 100-grain bullets in a strong design like the Nosler Partition.

Forget about using fragile bullets like the Ballistic Tip, even in the heavier bullets, for Deer sized game. A hit on a shoulder blade or other bone could cause the bullet to explode on impact.

When the 243 is Right For Deer Hunters

In the hands of an experienced and seasoned Rifleman, the 243 is more than adequate for Deer sized Game.

I once read an article by an Outdoor writer, I think it may have been Jack O’Connor or Jim Carmichel, that told a story about a man who used the .243 for Elk. He killed Elk every year with his rifle, everyone being a neck shot. He saw no need to buy a “real Elk gun”.

Does this make the 243 an ideal Elk Rifle? Methinks not!

However, in the hands of that Gentleman, it certainly was.

And so it is for Deer Hunting. I know a guy who kills 2 deer a year for his freezer. It doesn’t matter what they are as long as they’re legal. He has used a 243 Winchester for over 20 years and it’s the only “Big Game” Caliber rifle he owns.

Every deer that I’ve seen him kill has been a neck or head shot. He’s hunted out of the same two stands year after year for the last 20 years. His shots range from 30 to 300 yards. In his hands, the 243 is the perfect caliber for Deer.

Many new hunters cannot do these things due to a lack of experience. They don’t have the experience to wait steadily on a hang on stand and to recognize when a Buck is nervous and about to bolt. They haven’t learned how to control their breathing when putting the crosshairs on a Buck. Look out for the 7 mistakes deer hunters make.

It’s for this reason and mainly this reason alone, that I do not consider the .243 Winchester an adequate rifle for Deer hunting in the hands of a Beginning Deer Hunter.

As I stated above, there are other great choices of low-recoiling rounds for deer hunting that pack a bigger punch than the .243. Check ’em out before buying your potential new hunter a .243.

Nothing’s worse for a new hunter than to shoot a deer and not be able to recover it because of a marginal, or a poor, hit. Put the odds in their favor by using a larger round! If you must give a beginner a 243, then, by all means, make sure you use premium ammo like Fusion 243 ammo. It’s a reliable bullet and one that will work well as long as the shooter does his or her part!

Also Read: Hunting Weapons List- The Must Have Weapons for Serious Hunters

In the following video, watch and listen to GunBlue 490 expert advice on why  .243 wincheester still rules in deer hunting.

The 243 is the Best Deer Rifle of All Time: Find Out Why

The .243 is the best deer rifle of all time, and it’s not even close. Sure, .270s are a great option for larger animals like elk and moose.

But when you’re shooting at smaller game like whitetail deer or wild hogs, there is no substitute for the .243 winchester. The round has plenty of stopping power to take down any animal in North America that walks on two feet!

People who hunt deer love .243 rifles because they have both power and accuracy. They are accurate up to 200 yards which means there’s no need for spotters if you know your rifle has great trajectory.

You can simply shoot from where you set up without having to worry about hitting something else like a tree branch for fear of spoiling an otherwise perfect kill shot by passing through said object first.

– .243 is a popular round for smaller game such as deer, coyote and fox

– .243 rifles are easy to shoot accurately with just about any type of ammo

– .243 rounds can be found in many different types including hollow points, jacketed soft point and full metal jackets which each have their own advantages.

.243 rifles are available in both lever and bolt action styles

Explaining Bolt vs Lever Actions: It’s important to note that there is no “best” answer here as to which is better.

Personally I prefer Lever Actions over Bolt actions but there’s always room for personal preference when choosing what type of action you want your .243 to have! Remember . . . bolt actions are still very effective hunters as well so don’t let this article persuade you otherwise haha 😉

Lever actions have been around a lot longer than bolts but they both perform well. One thing to think about is how you want the rifle to balance, as this can affect accuracy.

If you’re looking for something lightweight that’s easy to carry while carrying other gear then maybe go with a .22 caliber lever action like the Marlin model 60 which also has an excellent trigger pull. This is perfect if you’ll be hunting only smaller game such as coyotes or groundhogs where precision isn’t much of a factor so long range shots aren’t necessary.

However, .30 caliber round should really only be used on larger game animals like deer and elk.

Savage 99 and browning qualifies for a good lever action

The Savage model 99 lever action is an affordable and lightweight bolt gun that shoots the same ammo as the AR15 (.223). The light recoil make it easy to shoot all day without getting sore or tired like you would if shooting heavy recoiling rifles like a 270.

The .243 Winchester has a little more power than the .223 Remington but not enough that you will need heavier recoil pads on your shoulder when shooting all day long during hunting season.

The .243 ammo is also much cheaper than some of its competitors such as .270/.30-06 rounds because they are both in the same family (.224). Additionally, this round does not kick quite as hard so guns don’t have to be regulated as heavily by law enforcement agencies from being sold across state lines due to their potential use for criminal activity.

The .243 owes its popularity to one very important factor: power. It’s completely unnecessary for the .243 winchester round to shoot at a high velocity, because it already has plenty of stopping power (as we will discuss in this post). Most .270s have an average muzzle energy around 4000-5000 ft/lbs.

The .243 on the other hand typically ranges from 2500ft/lbs and up! This means that while you may not get quite as big of a bang per shot with .270 rounds, they are more likely to be able to take down larger animals like elk or moose if necessary.

For some people hunting deer with a .270 rifle feels more comfortable than using a .223 or .22 caliber rifle.

Some would argue that when it comes to smaller game like these, larger calibers are better for putting down an animal quickly before it runs off into the woods and becomes lost in underbrush which could take hours or days to find again.

But if you’re not used to shooting large calibers, then either of these rounds make perfect sense for your next hunt.

Conclusion: The 243 is the best deer rifle for hunting because it has great range and velocity, which helps to take down a deer quickly. There are many rounds that can be used on smaller game in addition to this round if you’re not comfortable with larger calibers or recoil.