How to Choose an Upland Bird Hunting Guide 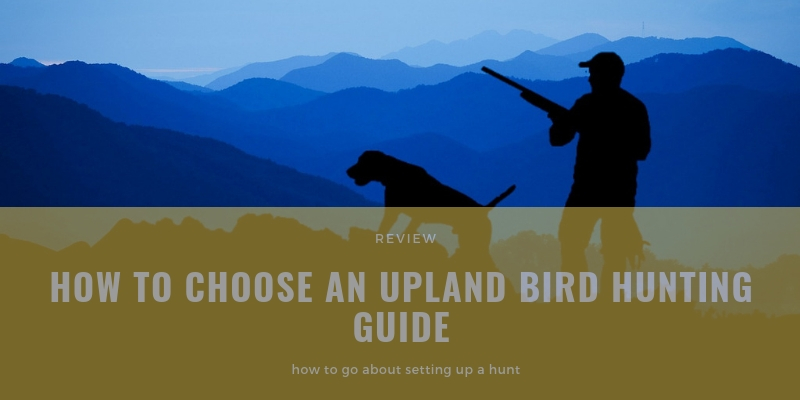 According to recent surveys, roughly 1 million upland bird hunters annually travel outside of their home states to pursue game.

Now one million hunters out of 10 to 12 million may not seem like an overwhelming number, but don’t be fooled by this. In real terms, the dollars involved are tremendous.

Thus, it behooves sportsmen to do everything possible to maximize their dollars and get what they want from a hunting trip.

Over the seasons, I’ve gone on a fair number of bird hunts with commercial outfitters. Some of them have been excellent, most have been at least satisfactory, while a very few were wash-outs. The question here is: how do you avoid the wash-outs; how do you put together an outfitter/hunt that will provide the services for which you are paying?

Several times a year, people ask me about upland bird trips; where to go, who to go with and how to go about setting up a hunt. These folks aren’t necessarily searching for the hunt of a lifetime. They want what we all look for in a guided hunt; enough birds, reasonable accommodations, decent dogs, competent guides. And we have every right to expect that these features will be part of any trip we book.

As a general rule, cost will determine what you get. A small preserve that charges $50 per day can’t provide much more than the birds you’ve paid for and a place to shoot them. This doesn’t mean small preserves don’t have a spot in the scheme of things, but they can’t offer anything beyond the basics. There are services which only provide guides. Leaving the hunters to find their own lodging and meals. Other stripped-down operations are available for clients who are interested solely in hunting and are willing to stay in fundamental cabins and eat rough-cooked camp meals. On the higher end of the cost spectrum are lodges which offer a full range of service. Typically, these will run between $300 per person per day to as much as $1,000 (or more) per day for quality facilities and personal accommodations. Hunters looking in the $300 (or less) range can usually book a hunt to satisfy all but the most demanding sportsmen.

One of the most important facts about an outfitter-guided bird hunt is, though they are costly, the expense is well justified. I’ve heard literally hundreds of hunters say, “I’m not going to pay someone to take me hunting. I can figure out where to go by myself.” Truth be told, the bulk of them can’t. There is little point to driving 1,000 miles for a long-anticipated hunt only to run into a multitude of posted signs, fumble around in strange country for week, spend a lot of money on gas, motels and meals. All that just to shoot two or three birds and then drive 1,000 miles home! A much better deal is to book with a quality outfitter and shoot a limit each day and have a good time doing it. As much as not, the difference between a fine hunt and a lousy hunt is the couple of hundred extra dollars paid for an outfitters services.

That said, let me lay down a ground-rule: when selecting an outfitter, do your homework. Gather all of the advice you can dig up on the type of hunting and the area before the hunt; the outfitters responsibility usually doesn’t kick in until you arrive at his place. Here are some guidelines for getting started.

Know What You Want From A Hunt

That sounds foolish, but it isn’t. Too many hunters never get beyond the “I want to go on a hunting trip stage” before booking with the first operation they see listed in a sporting magazine. They might get lucky, but the odds are much higher they will not have the hunt they hoped for or, worse, get burned outright. By this, I’m not saying all outfitters are slick shysters out to take your money. However, unprepared hunters won’t know what they have bought into until its too late.

If you have booked a wild bobwhite quail hunt, don’t conjure images of 50-bird coveys. That happens only in dreams. Or perhaps it’s a hunt for wild pheasants on Midwestern prairies; don’t expect to see a thousand birds daily or to have relaxed strolls in the fields. In that same vein, be truthful about your physical condition, both to yourself and to an outfitter. Don t imagine you can hike 10 to 15 miles a day, over rough ground, for three to five days if your longest walk in a decade has been to the fridge for dessert. Don’t be disappointed if all of the guide’s gun dogs aren’t world-class. If you are reasonable, there should be opportunities to take game under the conditions he offers.

You should decide what you want to hunt before ever booking your hunt. This is another bit of advice that sounds silly. It, too, is not. If you want to shoot pheasants and nothing else, that makes it simple. Go to a prime area for those birds, with an outfitter who specializes in hunting them. But many sportsmen want to hunt multiple birds to maximize their time. That’s fine, but it can change the complexion of a hunt. It’s best to have a primary game bird in mind and pursue the others if opportunities arise. By way of example, I’ve shot at least four types of birds on what were mainly pheasant hunts: ducks in early morning, pheasants and quail during the day and prairie chickens in the evening. But the thrust of such hunts was always pheasants. If the others worked out, fine. If, for some reason, ducks, quail and chickens couldn’t beedged-in, the pheasant hunt was still in place. Remember, no outfitter can do it all well.

Think About Other Features Of A Hunt

Other features means what, if anything, is important to you besides shooting birds—what extras would increase the quality of your overall experience? These extras can be high-quality accommodations and gourmet meals or the beauty of a surreal metropolitan area for purposes of sightseeing; while others thrive on backcountry experiences. To some sportsmen, the hunting itself is only part of the story.

In sum, all of this means think seriously, and well in advance, about what you would like from a hunt, and you will be far more likely to get it.