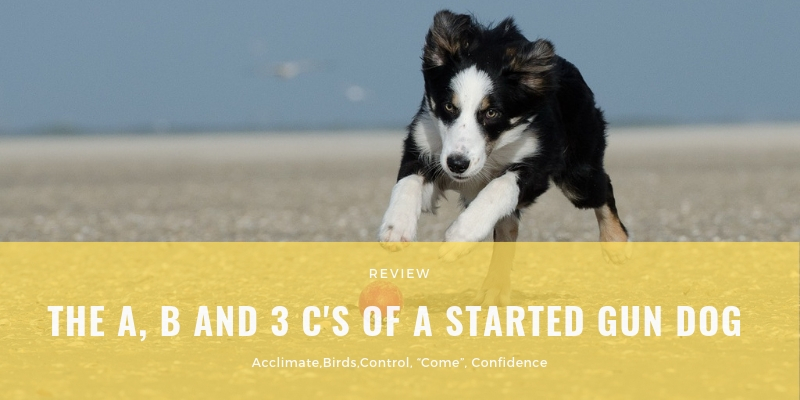 I read numerous magazine articles, read books and watched videos about training hunting retrievers in order to prepare myself for the arrival of my new chocolate lab pup last March.

Most of the information seemed rather straight forward, but still, I had lots of questions about training a pup to be a hunting retriever.

My goal was to train hard during the spring and summer months and then run my new pup “Storm” in the NAHRA Started Hunting Tests in the fall.

The more I learned about training, the more I started to question if my goal of finishing all four legs of the Started title in one season was too ambitious.

My greatest lessons were learned by participating in the spring and summer season training sessions and hunt tests that were conducted by Navesink River Hunting Retriever Club.

As a handler, I needed training on what was to be expected of me on the line.  I observed senior handlers and pros work their dogs, listened to their voice inflection and whistle use and studied their handling and temperament.

I must admit that on more than a few occasions, I almost lost my temper.

However, after realizing that this handler behavior would do Storm and me no good, I promised to monitor myself closely.  I decided that rather than place blame for Storms’ failures on her, I would turn them around and fix the problems by simplification and repetition.

The building blocks of a great retriever were being developed under my direction; I had taken on a very great responsibility.

During one of the first training sessions that I was involved with, I observed that some of the pups did not appear to have confidence in certain types of working environments.

The one pup that stands out in my mind was one who seemed so confused by the relatively high grass in which we trained.

She ran out fine to retrieve, but it seemed like she hit a brick wall when she came to clumps of dead grass only three feet high.

I promised myself that within reason, I would expose Storm to every type of hunting environment possible.  We took daily walks together and we would walk and explore.

We played hide and seek in grassy fields, romped in the mud, rolled in the sand at the beach and when she determined the time was right, we went for a swim together.

All of these early days of play gave her the confidence to explore new places with the possibility of finding new things to play with and eventually to hunt.

I made it fun and never allowed her opportunity to put herself into a predicament that would cause her harm or damage her confidence level.

Gun shyness was always one of my biggest concerns.

I started Storm’s acclimation to gunfire just as many others do.  I purchased a twenty-dollar starter pistol and capped off a few rounds as she was on her way out for the retrieve.

Let’s face it, the name of this game is almost all about birds!

In anticipation of getting my first pup, I saved every duck wing from every duck I shot during the fall season.  I made phone calls to game farms and researched a source of live pigeons.

If you’re a waterfowl and upland hunter as I am, you get a dog to help you retrieve downed birds and to locate birds in the field.  That doesn’t mean you have to be a hunter to run pup hunt tests.

When Storm was just 7 weeks old, I brought her home from the breeder.  The next day we played with a black duck wing and I let her bite, chew and retrieve the wing to her heart’s content.  We tossed it down the hallway and in the back yard.  At first, just short retrieves, but man she loved the game.

At 8 weeks old I bought her two baby quail to play with.  She didn’t know what the heck they were and I thought to myself “oh, this is great- I’ve got a dog that thinks she’s a mother quail.”

Soon, her predator instincts clicked in and she made a short meal of the quail (not by my design).  She even growled at me, when I attempted to take it from her and she ran when I approached her.

I assume that at only 8 weeks she was still trying to establish her place in the new pack.  Now worried, I thought I had produced a bloodthirsty dog that only wanted to play keep away.

We later graduated to live pigeons, dead ducks and live ducks during training sessions.  Again, it was all a game for her.

This ended the day when she refused to come when I called her and I watched from 70 yards as she plucked a duck in front of me, despite my pleadings and then shouting for her to ‘Come!”.

This scenario corresponded very nicely to her getting her adult teeth.  It was at this stage of our relationship that I new I had to establish more control and force fetch was soon to follow.

This aspect of the AB and 3 C’s relates to three issues that I believe are the backbone of the Started gun dog.

First, you must have control over your dog.  This means that obedience must be firmly engrained in your dog’s mind.

Most dogs are easy to train to sit.

I incorporated the whistle early in the obedience training.  For a Started gun dog, heel is conducted on a leash all the way to the line.  I encourage you to keep your dog on the leash, even at the line.

Release your dog only when the judge has stated to do so.

You may think your pup is steady, but the sights and sounds of any hunt test will cause many to break.  Try to set up your training sessions just like a hunt test; this will help establish better control over your dog.

Typically, Storm was a true lady in the yard, but when walking to the line in a hunt test, all bets were off.  It was almost embarrassing to have a dog walk to the line on her two hind feet.

I soon discovered that magic of a slip lead and how to cinche the lead up close to the base of her jaw and around the rear base of her head.

Now instead of her pulling my arm out of the socket while walking to the line, I maintained much better control, although essentially she controlled the pressure.  She then proceeded to almost tip toe to the line.

The command “come” is often the most difficult to enforce, especially without the e-collar.  This is where the check cord comes in play.

I’ll be the first one to admit it – I hated working with the check cord and I have the scars around my ankles to prove it, but how else are you going to get a stubborn dog to come to you when he’s twenty feet away and has a bird or bumper in his mouth?

Grab the check cord and pull’em to you, that’s how, but say the command “come” once and once only.  Give lots of praise when your dog returns.

Make them want to be next to you.  I once saw a “gentleman” beat his German Sheppard after the dog disregarded his repeated demands to “come”.  I think the dog must have known that he was about to get an ass whippin.  Now if I were that dog, I’m not sure I would have been in a great hurry to be by my master’s side either.

When you’re out for your casual walks, mix in a few “sit” commands, “sit” whistles and numerous “come” commands.

The “come” command means:  “git yer butt over to me now!”  Not when the dog feels like it.

I practiced a simplified drill with Storm for weeks prior to and during the force fetch process.  After she knew how to “hold” a bumper in her mouth, I put her out about 10 feet on a check cord and gave her the “come” command.

She had no other option, but to comply.

When she got to me, I told her to “heel” and guided her to the proper position at my side.  When force fetch was completed (more control) the problem of having her drop the bumper or bird 10 feet away was essentially over.  This drill also established the aspect of returning to heel, but now with a bird or bumper in her mouth.

You never know what your dog is going to do in a training session or a hunt test, regardless of how well you have prepared.

Hopefully, all of the training and practice you have completed have established a dog that is confident in his ability to negotiate different terrain and various different hunting scenarios.

Furthermore, as a handler, you will have established a calm demeanor that your dog will be able to sense.

Although the Started gun dog is generally tested on natural ability, later the dog and handler will need to bond further and develop as a team in order to make the huge leap to Intermediate.

Storm and I are now training towards our Intermediate title, but hopefully, we have firmly established a foundation during her early retriever training to make this process easier and successful.  We still train and play by our AB & 3C’s.