This subject came to mind when I received an email from a reader asking what mistakes he should avoid when starting out deer hunting.

Geez, talk about a loaded question (no pun intended)! After a little thought, I’ve come up with the 7 most common mistakes I believe new deer hunters make.

If you see one that should be on the list, drop me a line. So, here are my top 7 mistakes I see deer hunters make. In no certain order. 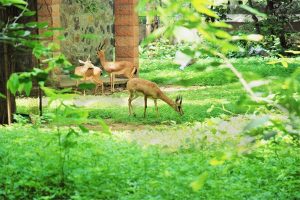 1. They fail to scout

Now when I say scout, that’s exactly what I mean. I don’t mean lollygagging around the woods taking potshots with a .22 a few days before the season. I mean getting out weeks before the season opens and scouring your hunting area real good.

Even if you’re familiar with the lay of the land, you’ll be surprised from time to time by what you find. Lots of things can change from season to season, that’s why it’s important to get out and scout!

2. They fail to become proficient with the weapon they’re using

The funny thing is, the definition of ‘proficient’ changes from hunter to hunter. Some may believe it’s being able to shoot a 2″ group at 100 yards.

Others think if they can hit a 12″x12″ piece of paper at 50 yards, that is all they need. When I was a kid, my dad used to hang a one-gallon paint bucket on a limb at about 50 yards. If he could hit it with his open sighted 30-30 Marlin, then his gun was “sighted in” and he was perfectly happy.

And he killed a lot of deer with that gun, few were rarely shot past 50 yards though.

I think most of us would agree that a scoped modern rifle should be able to put at least 3 rounds inside 3 inches at any range up to 100 yards. If the gun can do that, then the shooter should practice proper breath control and trigger squeeze.

For bowhunters, I believe they should be able to keep all their arrows inside a 5 or even 6-inch group out to 40 yards. Obviously, I’d like to see them also keep at least 3 arrows in a 3-inch circle out to 40, but I had trouble doing that at 40 yards with my old compound.

Only when I started shooting instinctively did my accuracy improve greatly. I just could never develop the form to shoot accurately with sights out to 40 yards.

Over the years I’ve learned that many times I found that a lack of patience was really a lack of confidence in most cases. Funny that you have no trouble sitting in a blind until noon if you’re seeing deer, or if you think you’ll be seeing them.

But a lot of people have a problem sitting still even an hour or so before they get up and start walking around. Which by the way, is another mistake beginners make!

I can’t tell you how many deer I’ve watched impatient hunters spook because they were out of their blind or treestand by 8 or 9 and started walking around.

If you’ve done your scouting properly, there should be no reason for you to be out plopping around the freakin’ woods at 8 or 9 a.m. You’re better off going back to camp and making coffee for everyone else who will be filing in a few hours.

4. They call too much

I think beginners and even some veterans should have their deer calls taken away. I’d bet that the majority of deer hunters have never heard a real deer in the woods.

And of those hunters, the majority of them have never listened to a pro on a CD or DVD call deer. They may have seen one of the TV show cowboys do it, but few have taken the time to hear real deer call in the woods.

Even if you’re using an excellent grunt call like the MAD Grunt/Snort/Wheez call, you can easily over call and spook deer!

Usually, one of two things happen”

I’ve been deer hunting for nearly 30 years now and I’ve heard deer vocalize only a few dozen times over the years. Of course, I probably spend a lot more time scouting and deer hunting than the average Joe as well.

Deer make soft subtle sounds, even a buck trailing a hot doe doesn’t grunt near as loud as many commercial call sound. Plus, deer don’t make a continuous sound every step they make!

5. They use too much scent

Like over calling, a lot of deer hunters are relying on that magical deer in a bottle to produce a buck for them. Many deer hunters subscribe to the theory that more is better. That just isn’t true!

I dearly loved to watch the late Ben Rogers Lee. I use to have nearly all of his deer hunting videos and I learned a lot from watching them.

However, I cringed when he would pour a whole bottle of his deer scent on a tarsal gland or rag and say something like “Now you can’t get too much of this scent on the ground, use plenty so the Buck can really smell it”.

I know he was just selling deer scent, but then again the guy didn’t have a problem killing deer. He knew them just as well as he knew the habits of Turkey. But beginners thought his ‘secret to success’ was all that deer scent he was pouring out!

Deer can put bloodhounds to shame. If you’re going to use scent, use only a few drops. I think the majority of deer hunters would do far better without scents than with them. Most don’t know how to use them properly or when to use them.

I personally don’t want a deer to know I’m anywhere around when he comes by my stand. Sure, I’ve had scents work and I’ve had them spook deer, especially when using a Doe in Estrous scent during the rut.

Many small bucks that have had their butts whipped will spook. So will does. They know that if a Buck is present, it’ll be cold nosing them and pestering them for a long time. So they will avoid another doe who smells like she is ‘in’.

That’s why most of the time you’ll find me using a deer scent like Wildlife Research’s Trails End #307. I’ve used it for many years and it doesn’t seem to spook deer in my area during the rut. I’ve also seen it attract several deer that I know of, including a few bucks.

There’s a saying in the business world that goes something like “If you fail to plan, then you’re planning to fail”. The same could be said about deer hunting.

You should have alternate hunting stand locations mapped out and know which wind directions they are good for. Plus, a simple checklist that you check before heading out will keep you from forgetting an important part of your gear.

Over the years I’ve heard of more than one story about a deer hunter who went ahead and sits in their stand even though they had forgotten their weapon or ammo only to have a buck walk by within range. I bet you’ve heard one or two stories about unprepared hunters.

7. The use cheap equipment

When I say ‘cheap’, I mean poor quality equipment. I can’t tell you how many people just want the cheapest piece of equipment they can find. Whether it’s the cheapest bow, treestand, game camera or rifle, it seems their only requirement is that the equipment is cheap.

It’s okay to save a buck (no pun intended), but simply being a cheapskate because you’re tight is a whole different matter.

Poor quality hunting equipment can come back to bite you when you need it the most. Like scopes, rifles, bows, clothes, boots and other deer hunting products, sometimes it’s better to save up a little while longer and buy the good stuff.

Don’t get me wrong. Although I see beginners make most of these mistakes, making these mistakes don’t seem to know the difference between a beginning deer hunter and someone who’s been hunting for decades.

The only thing I can see is that serious deer hunters make fewer of these mistakes than the weekend warriors. I believe it comes down to how serious you are about deer hunting. The more serious you are, the more you’re likely to learn from your mistakes and not repeat them.alloutprodux.com