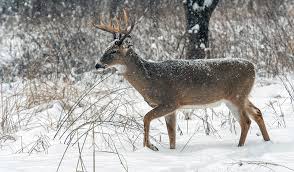 Okay, be honest, how many of you that live in States or Provinces that have late deer hunting season have forgotten about deer hunting?

If you’re like I used to be, you’re probably thinking about the upcoming fishing season or you’re hunting Small Game and Waterfowl.

But you could be missing out on the best time to take a good buck.

The truth is most hunters give up deer hunting after the second weekend.

When I hunted in the Ozark Mountains in Arkansas, they had something like a 21 day gun season the best I recall. After the second weekend, the woods were empty! It’s like I had them all to myself.  If you saw anyone during the late bow season, they were probably lost!

When I lived in Oklahoma, ‘back in the day’, there was a 9 day rifle season at the end of November. December was a late archery season.

It wasn’t until I started hunting in the late season that I found the deer easier to pattern and easier to kill.

Here are some late season deer hunting tips I learned along the way.

I spent many a frozen morning in my stand waiting on deer. Most of the time, this was wasted time and there were times I was so cold I had to call it quits. I once read an article by the late Ben Lee where he said deer bed up until mid-morning because they don’t like to feed on frozen vegetation. I think that’s true!

Also, the mornings are cold and deer know if they wait, it will warm up. They know they can reserve body heat by waiting to feed later in the day. Besides, these are the best excuses I can come up with for sleeping in!

Practice shooting in your winter clothes

Whether you’re shooting a bow, muzzleloader or modern rifle(or shotgun), practice in the clothes you’ll be wearing. Bulky clothes can make you shoot differently than the same clothes you had on when you sighted your weapon in.

Bowstrings are notorious for catching on bulky clothes and guns seem to get snagged on the extra clothes as your raising them to shoot.

You may also want to think about reducing the poundage on your bow. It’s hard to pull a heavy poundage bow when your muscles are cold!

During the late season there is a “secondary” rut. Not as noticeable as the first, but enough to make the bucks go bonkers. The secondary rut is for the Does who did not get bred the first time around.

From what I can tell, the secondary rut is also drawn out. So you may see Bucks chasing Does anytime during the late season. Give your rattling antlers and deer calls a try this time of year.

It’s all about the food

In late season, Deer need food and lots of it to maintain their body heat and survive the Winter. Bucks will be trying to put on some fat before the hardest part of Winter hits as will the Does. This is why it’s the easiest season to hunt in my opinion.

Find a good food source, find the trails leading into these food sources and sit back and wait for the right Deer!

The South will rise again

If you’re into still hunting or stand hunting bedding areas, look on the South slopes or areas facing South. These areas warm quicker and sooner than in other areas.

You’ll find your Deer here working on their tans and staying warm.

Cold fronts seem to affect Deer movement more in the late season than at any other time in my experience. Deer will really be up and feeding heavy a few days prior to the arrival of a cold front and the days following a cold front.

Also in my experience, it seems the amount they’re up and moving is also dictated by how severe the front is. Weird, but that’s been my experience. They seem to “sense” whether or not the approaching front is a “weather maker.”

When the temperature plummets, it’s time to break out the cold weather clothes. I still prefer wool clothing on those days with the exception of my Windbreaker coat.

I have a friend who swears by the Arctic Shield line of clothes. Whatever you wear, remember to dress in layers.

One December I was hunting before the arrival of a major front. The day was really, really cold. It was one of those days when the Sun was out, but you’d thought that it had lost all the heat.

It was like the Sun was just making an appearance for the heck of it. No warmth was coming out of that big orange ball on this day!

I had taken my camo sleeping bag and put it on while in my treestand. It was one of the warmest late season hunts I’d ever had! (I don’t recommend this, however, if you do use it, make sure you use a safety belt if you’re hunting from a treestand)

On late season hunts, I bring along some water, sometimes Coffee and high energy snacks. Keeping your tummy full will help you stay warm during the day.

Before climbing into your stand, make sure there is no ice. Ditto for treesteps if you’re using them. I take a piece of carpet and lay over the seat and platform to keep the snow and ice off of these areas.

Remember, there are few leaves on the tree now and you’ll most likely be outlined against the sky when a Deer looks up. I switch to either a Winter camo pattern or an Urban-type camo as both are not as dark and stark.

If you plan on using a muzzleloader, keep it outside. Taking a muzzleloader from a nice warm home or vehicle into frigid air will cause condensation to form in the barrel. Even if you snap a few caps the moisture is likely to come back.

This affects those who are still using traditional blackpowder more than those who are using modern primers and black powder substitutes.

There you go. You State’s Deer season may still be underway. Get out there after them! It’s my favorite time to hunt deer!