I have to admit, as I get older, it’s getting harder and harder to think about scouting for deer when it’s 100 degrees outside.

I’m usually thinking of my next fishing trip or how high my electric bill will be! I’ll bet that many of you are the same way, whether you’re old or young! 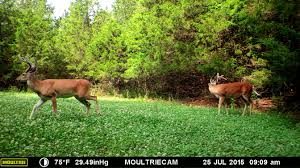 Advantages To Scouting for Deer in the Summer

There is pretty much two worlds of thought about scouting for deer in the Summer. Some believe that it does no good, believing any bucks you might see will be long gone come October or November.

Others believe scouting for deer in the Summer is helpful because it will show you what quality of bucks you’ll have come fall.

In my opinion, both trains of thought are right and wrong. Allow me to voice my opinion.

In years past when I scouted heavily for Deer in the Summer, I knew that most of the Bucks I saw would be gone by early Fall.

Bucks just will not hang out in bachelor groups all year long. Especially the younger ones. They seem to wear out their welcome among the other Deer pretty quick!

So they disband and go their separate ways. Many will not see each other again unless it’s in one hunter’s freezer.

I’ve found this to be especially true if there are a lot of Does around. It seems the Does know that these little Bucks will be pestering them relentlessly in a few months and they try and run them off.

In areas with few does, I’ve found that the little Bucks will hang around longer, sometimes right up to the gun Deer season.

Simply put, they’re unpredictable year round. If you see a large buck in your back yard all Summer long, chances are he’ll be gone in Sept. or October.

Other times, I’ve watched big Bucks in fields and pipeline and power line right-of-ways and those bucks were still hanging around the general area come to the rut.

Many hunters who hang out scouting cameras wonder where the big Bucks they see in the Summer have gone when it comes hunting season.

Truth is, they’re out partying with the girls! Or trying to find girls to party with.

It seems that the more remote the areas I scout and find big Bucks, the more likely it is they’ll be hanging around when Gun season rolls around. But when you’re talking big Bucks, nothing is written in stone.

They may get hit by a car or die of natural causes. They may get whipped by a stronger buck and be forced to leave their core area. They may wake up one morning and feel pressured to leave by who knows what and they beeline out of the country. Big Deer have a mind of their own.

I’m always amazed at how cautious the big Bucks are even in the dead of Summer. They’re generally the last ones to exit cover and the first ones back in. It’s like they never relax entirely. The bigger they are, the more cautious they are. They didn’t get those big ole racks by being smart only during hunting season!

Where to Start Looking For Summertime Bucks

You have to remember one thing when looking for Summertime Bucks. They’re carrying around antlers on their heads that are covered with velvet that has millions of nerve endings and blood vessels in them. They know they have to protect their velvet from bugs and things that might scuff up their headgear.

They prefer to stay in semi-open terrain where there are breezes to keep the bugs and branches to a minimum.

I find many bucks in the same general area as Does during the Summer. Fields are a great place to glass in the mornings and evenings.

My favorite places to search for Summer Bucks are pipeline and power line right of ways. This is true especially if I’m scouting a new area or want to see what quality of Bucks the current area holds.

In some states, you can actually spotlight Deer at night. Just be sure to check your local regulations before doing this!

Summertime scouting for deer also gives you the chance to pattern the Does. Chances are they’ll stick around the entire year. It helps to try and learn their patterns as well.

Of course, as the food sources change, so will the patterns. In agriculture areas, those patterns don’t seem to change as much as they do in Deep Woods. Keep that in mind when you’re scouting your hunting area.

I’ve actually watched Does playing in an old Slough one year while Squirrel hunting. So expect the unexpected.

I’ve heard some people say that you’re wasting your time scouting in the Summer. This isn’t exactly true. If you only hunt the Gun Season or Late Season, then there might be some truth to this.

In States that have early hunting Seasons, Summer scouting can allow you to pattern and kill a Buck before some Hunters even start thinking about putting stands out.

The bachelor groups will still be around in August and even early September in most places. This gives early Season Hunters a chance to pattern and take the Buck of their choice before he goes bonkers and heads out to parts unknown.

The more you get out and learn what the Deer are doing in your hunting area do under certain times and conditions, the more you’re likely in the right place at the right time. Don’t ignore scouting for Deer in the Summer, it can be a great time to get out before the Season and see what your hunting area has to offer.alloutprodux.com