In some parts of the country, the bow season for Deer has already opened. By October 1st, most will open or have been opened.

Hunting deer in the early season is a lot different than hunting them later in the fall. A month can make a lot of difference as to where you’ll find deer and how they are living.

The early season generally includes hot weather. Deer dislike extreme temperatures just as much as you and me, possibly even more since they’re wearing a fur coat.

To be successful in the early deer season, here are some tips that will help you bring home the venison 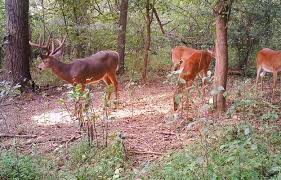 In farm country, this can be as easy as finding which planted field they’re feeding in. In non-agriculture areas, this can be anything from honeysuckle, muscadines or young vegetation in a cleared area.

Even in agriculture areas, deer may stop before reaching the primary feeding fields to browse some new plant growth or honeysuckle bushes. Find these areas and intercept the deer before they get there!

It’s hard to sit still while every biting insect in the woods is having a buffet on your body.

I don’t care how tough you are, if some biting bug reaches certain parts of our anatomy, you’re going to move to scratch it! In the early season, I use bug proof suits such as
Shannon Big Leaf Bug Tamer Plus 3-D Parka. These suits keep the Skeeters and other nasty insects at bay plus they’re not bulky and allow your body to be ventilated.

If you’re hunting lowland swamps or other waterways, then this tip will obviously not be as effective as if you’re hunting the drylands. Deer need water. If you’re hunting an area where water is a precious commodity, then find the water source to see if deer are using it.

Not only can remote ponds and sloughs be a great place to find a watering hole, but many times the cleared area around these watering holes have lush vegetation that the deer love and use as a food source.

Deer Hunting Tip: Don’t forget to take your own source of water when hunting the early season!

4. The sweeter the honey

. (yeah, I know it says “food plot” but trust me, it’ll work on other types of plants!)

This will help berry and nut bushes produce more abundant crops of sweet fruit and it helps bushes such as honeysuckle to grow more tender branches!

You can also use the commercial fertilizer stakes intended for nut trees to fertilize Oak and other nut-bearing trees in the early spring prior to blooming for a greater crop of sweeter nuts come fall.

If you don’t think deer will beat a path by an unfertilized acorn bearing White Oak tree to get to one that’s been fertilized, just try it! Make sure you follow the directions so the trees will be fertilized properly, otherwise you’ll be wasting your time.

Sure, every year a few people get lucky, mostly during the rut, and kill a big buck in an open field. More are killed just inside the edge of those place. Anywhere from 20 yards to 100 yards inside a field is a great place to set up.

Look at inside corners first and then look at pennisula’s jutting out into the fields. These allow bucks to stay under cover long while being close to the food and later in the Fall, the Does!!

6. ‘Mini’ food plots can be the key to success

If your hunting area doesn’t have a lot of browse, say in old growth National Forest, make “mini” food plots in your area. Just make sure it’s legal in your area first.

Don’t get carried away with these “mini” plots.

The key to their success is to keep them small. I especially like to find an opening 10 to 50 yards outside an overgrown clearcut or another type of thicket.

Make sure the spot you choose get’s enough sunlight and clear away the forest carpet and use a no-till seed mixture like Evolved Harvest Easy Plot No-Till Forage Seed to seed the opening.

It doesn’t have to be a huge spot, in fact, like I said earlier, the smaller the better. A “mini” size of 10′ x 12′ is all you need. I’ve even had success with smaller plots than that.

Once you’ve planted them, don’t forget to fertilize your “mini” plot. If a water source is near, I strongly urge you to consider watering the plot after it has been “planted”.

You can do this with any old watering can. I used to use a 5-gallon bucket to carry the water back to the plot and then use a 1/2 gallon water can with a sprinkler head to water my “mini” plot. What this “mini” food plot does is give the deer a place to come out in the early evenings and stop to browse a little before heading off to the main food source.

It also gives the deer a place to stop by and grab a few quick bites on their way back to the thicket in the mornings.

I can’t tell you how many times I see guys out there about to drop dead from heat exposure because they’re wearing their Fall and Winter hunting clothes in 80-degree weather! My early season hunting clothes usually consist of a long sleeve T-shirt, sometimes even a short sleeve T-shirt with a Bug Tamer suit over that.

A simple OD Green Army Surplus T-Shirt, loose-fitting, is also a great early season clothing option.  You’re not going to be alert and in the ‘zone’ if you’re sweating a gallon a minute!

A lightweight cap is also essential. Most everyone knows that the majority of your heat loss is through your head. In early season, you want to get rid of body heat. Don’t trap body heat in with a heavy Fall or Winter style hunting hat!

8. Be aware of what’s around you

I can’t tell you how many stories I’ve heard of deer hunters getting to a stand or ground blind early in the year and learning that a nest of Wasp has set up shop with them or walking upon a snake while on the way to their stands.

Pay attention to what’s going on around you. If you’ll be hunting out of a stand or blind that has been in place for more than a week, be careful when approaching it.

Blinds should be checked for Wasp, snakes and other bad critters before climbing in!

9. Don’t forget about your game animal!

If you’re one of the successful hunters in the early season, don’t forget about proper meat preparation. The deer should be field dressed as soon as possible.

I also carry game bags made out of cheesecloth to slip over the deer to keep flies and dirt out of the carcass. Nothing ruins a hunt more than finding maggots inside your deer carcass the next morning!

They’re also more likely to run in Bachelor groups and are easily patterned in the Summer months. They’ll remain in their Summer pattern up until the first hint of Fall or the Rut, whichever comes first in your neck of the Woods! Good luck and I hope you’ve enjoyed these early season deer hunting tips.alloutprodux.com