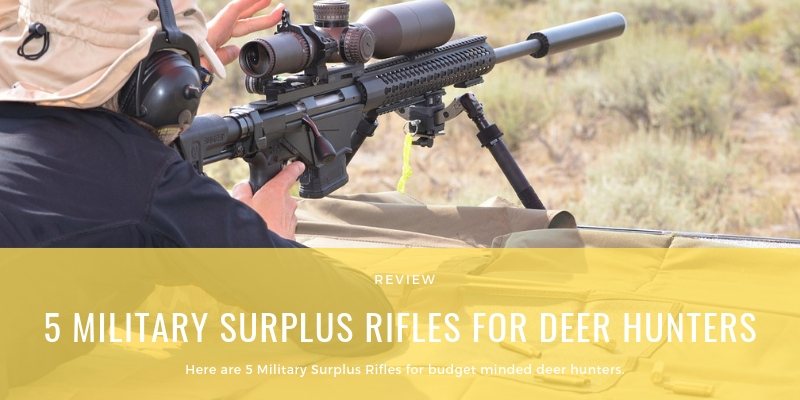 Not all deer hunters have gun cabinets full of $1000 deer rifles. Some deer hunters can’t afford such rifles and some only hunt deer once a year and can’t see spending hundreds of dollars for a rifle.

For the bargain hunting deer hunter, military surplus rifles can offer a great way to get their hands on a good hunting rifle at bargain prices.

I picked these rifles because you can get them for a song. These military surplus rifles are solid and come in good deer calibers, plus the rifles in the list are budget priced. Many can be had for under $200.

Even though the M1 Garand, Springfield 1903 and M-14 Semi-Auto’s are more than adequate for deer, or any other big game for that matter, you won’t see them on the list due to their price tags. Some of these guns can set you back a grand or more!

I also do not consider the M1 Carbine an adequate deer rifle, even though I’m sure it has taken a few. Besides, it’s hard to find a “bargain” M1 Carbine!

It should go without saying, but I’ll repeat it here. You should have any Military Surplus rifle thoroughly cleaned and checked out by a competent gunsmith before shooting it.

I’m going to start with the most popular military surplus rifle on the market today. Probably even more popular than the AK-47 semi-auto knock offs.

A budget minded deer hunter can get a SKS for under $200 (much less in many cases). The nice thing is, many manufacturers now stock a huge variety of accessories for the SKS, including Sporting stocks and Scope mounts.

NOTE: UNDER NO CIRCUMSTANCES SHOULD YOU USE FULL METAL JACKET AMMO FOR DEER HUNTING IN ANY CALIBER!

The Yugoslav M48 is a Mauser rifle that is chambered in the 8mm round. This round is more than suitable for and Deer that walks.

Of the Mauser M48 rifles that I’ve shot, accuracy tends to be hit or miss. Some that I’ve shot are very accurate (2 inches or better at 100 yards with iron sights) and some are questionable (worse one was about 4 inches at 100 yards). Overall though, these rifles are known to be accurate shooters. Many were put into service as Sniper rifles in several countries.

I hesitated to put this gun into this list because good quality Krags are getting harder and harder to find and when you do find them, they can be pricey. But, I’m still seeing a few Krags for under $400 at Gun Shows and every once in a while I’ll see one in the Classified section of the local paper for peanuts.

The 30-40 Krag rifle is pretty darn accurate, at least in the rifles that I’ve shot it in.

The Krag comes with a side magazine, something I’m not crazy about but most people do get used to it after using the rifle for a while. The box magazine will hold 5 rounds. Most ammo manufacturers offer at least one flavor for the 30-40 Krag.

My first contact with a 7.65 Argentine was at a deer camp many moons ago. I had just gotten married the Month before and my new brother-in-law invited me to a deer camp to hunt. The deer camp turned out to be an old school bus in the middle of the woods, with no heat other than a single burner propane stove! It got down to 19 degrees that night. Needless to say, I couldn’t wait for the sun to come up the next morning!

My brother-in-law came out carrying this carbine military rifle and explained to me that it was a 7.65 Argentine. It had a shortened barrel and an attempt had been made to “sporterize” it. He swore to me that he’d taken several deer with it already, but I didn’t believe him 100%. I about laughed when he handed me some of his “hunting” rounds. The were mil surplus FMJ’s!

I said “Bub, you’re using FMJ. I think you need to get some sporting ammo” and after a little bit more discussion, he agreed. The next surprise I was in for was finding ammo for the 7.65 in the middle of nowhere. We finally found a box of Norma’s at a Pawn Shop a few towns away and boy were they pricey!

That gun shot like a dream though. It shot a helluva lot better than my brother-in-law could shoot it. Anyhow, I tried to buy it off of him several times and he refused. I tried to trade it to him and he refused (I suspect it was because he didn’t like me…go figure).

The 7.65 is close to the .308 in size. Performance wise, it can handle any deer you want to take on. It has more than enough “power” for deer sized game.

There is also a “Jungle Carbine” version of the Enfield 303, but from what I’ve read, they’re notorious for being inaccurate.

The .303 Britishround is more than enough round for any deer that might walk by your stand. Most of the standard model Enfield No. 4’s are more than accurate for deer hunting. Ammo is reasonably easy to find for the .303 unless you’re in the middle of nowhere!

Many of these military surplus rifles can be sporterized. Just remember it comes at an additional cost!

I’ve seen many sporterized version of military surplus rifles and many need to be in the local junk yard. I’ve owned a few of these also!

Some of the most beautiful rifles I’ve even seen have been sportorized mil surplus rifles. Make sure the Gunsmith that sportorized your rifle is competent. Ask to see some of his other work.

If you’re buying one already sportorized, look it over real good. On some of the military surplus rifles, the bolt will hit the scope bell when thrown up. This means you’ll have to either use see thru mounts or have the bolt turned down and possibly even ground down a bit.

Make sure any rifle you buy is looked over by a competent Gunsmith.

These military surplus rifles will give you years of service with little maintenance. Because that’s the way they were designed!