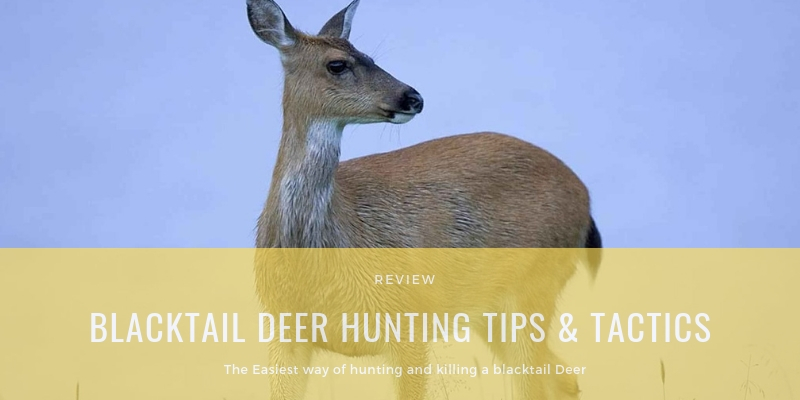 I had been sitting just below the crest of the low ridge with my back against a tree for more than 2 1/2 hours, and the close of the day’s legal shooting hours was approaching.

I was on the dark side of a mountain, there was a heavy overcast, and it was getting increasingly tough to see into the brush.

Blacktail bucks that have lived to acquire any age and wariness become almost totally nocturnal during the early part of the hunting season, and I knew that if one was going to show, it would be dark–or the closest thing to it.

The “clearing” I watched was only 20 yards across and not totally free of brush. There was a deer trail along the edge of it–not a deeply rutted or even well-defined trail but an almost imperceptible series of large tracks.

Big blacktails are usually solitary during hunting season and often travel their own trails just off the main trail. This was just such a situation, and I had high hopes.

Suddenly, a ghostly shadow revealed itself just over the crest of a rocky outcrop below me and to my right. At first I thought it was a raccoon, but as the form moved I realized it was some distance behind the rock. It was a deer screened by brush, and when he moved again I saw it was a buck.

For several minutes I saw nothing more, then–quickly and silently–the buck emerged not 10 yards away. There I sat, in full view of a good buck so close I could almost spit on him, and my rifle lay across my lap. I held my breath as the buck stopped, staring straight ahead, and then began walking again.

When he passed out of sight behind a clump of brush, I raised the rifle. The buck wasn’t stopping, and when he reappeared on the other side of the brush, I fired before he could walk out of sight for good. I found him a few yards away, shot through the heart.

Blacktail deer are found along the Pacific Coast from northern California to Alaska, and many hunters consider a good buck of this species to be the toughest of all deer to tag. Blacktails usually inhabit coastal mountains that get a lot of moisture, and the dense jungles of ferns, vine maple, salal and countless other plant species can make deer almost impossible to see. Much of this country is steep and full of moss-covered, slick-as-grease blowdowns, and a wrong step will send you tumbling head over heels down the mountain.

Blacktails in this country are virtually unhunted. Fortunately, the wary bucks also inhabit gentler, more huntable slopes–many of them fairly readily accessible. One thing you can count on is that blacktail bucks will always be in or near heavy cover, and about the only time they venture into the open during hunting season is after dark.

I live in blacktail country, and few days pass that I don’t see at least several deer on my property. At some times of the year it is not uncommon for me to see 40 or more does and small bucks just before dark, but seldom will a big buck venture out in daylight unless it is during the preseason–when bucks are usually bunched up–or later in the year during the rut.

There are three or four primary tactics that take blacktails consistently. Stand hunting is one of the best, whether it be from a tree stand or from the ground. The keys here, as with most types of hunting, are to find the right sign and pick a good spot. Tracks, droppings and rubs will give you some idea of where the deer are feeding and bedding. They may bed in a mature forest, but there is not much food there, so in the evenings deer head out to feed in spots that get more sunlight. Clearcuts are prime locations.

Blacktails generally feed downhill in the evening and then go uphill to bed in the morning. Keep in mind that any worthwhile blacktail buck is going to keep under cover, so locate your stand accordingly. You may find beds and tracks in the open, but you can bet the sign represents either does and fawns or the nighttime activity of bigger bucks.

To get a good buck in the daytime, you’ve got to somehow hunt the thick cover. There’s a fine line between a stand that’s in cover heavy enough for daytime deer action and one that’s open enough so you can see well enough to get a shot.

There are those who take blacktails by still-hunting, but unless you’re lucky, you need uncommon hunting skill to get a blacktail this way.

For the most part, blacktails do not migrate much because the majority of their coastal habitat does not get a lot of snow. Consequently, their home range is small, and they know it well. A blacktail buck knows all the escape routes and where and how to bed to get notice of approaching danger. Since the cover is heavy, it is difficult for a hunter to move through the best of it quietly.

Experienced still-hunters usually rely on the rain. Some don’t attempt still-hunting unless the forest is soggy wet from rain, which muffles the sounds of dry sticks and fallen leaves on the forest floor. Rain is usually not far off in the coastal areas where blacktails are found, particularly later in the season.

If you hunt with a partner, it is often possible to benefit from working together. One person can position himself along a travel route from a known bedding area while the other person circles around and approaches the bedding cover from the opposite side. As with all types of blacktail hunting, you’ve got to keep the wind right, and the person on stand has to approach the area without being seen, scented or heard.

This type of hunting is often hit and miss, but it can be productive. Several seasons ago, my hunting partner and I found a heavily timbered bedding area that surrounded a relatively small peak somewhat open on three sides. We came back several days later and drove my truck to the east side, where I dropped off my hunting partner. I then made a wide circle around to the south, far from the peak, and parked. Then I sneaked into position at the west side of the peak along the edge of the timber–about half a mile from where I’d left my partner.

At the appointed time, my buddy entered the east side of the timber and began still-hunting toward me while I waited. After about 15 minutes, a good buck broke out of the timber at a dead run, passing within 50 yards of my position and heading for a large timbered area down the hill. I swung on him with a .240 Wby. Mag., and just as he disappeared again into the timber I let go a round. We found the buck, piled up 30 yards inside the cover.

Unlike with mule deer in open country, it is difficult to spot and stalk blacktails. Some hunters do glass for blacktails in clearcuts in steep country, but rather than stalk in close, they shoot at long range. Glassing for blacktails is different because the dense vegetation means you’ve got to look painfully closely and carefully, often for long periods. You’ll be lucky to see even a tiny part of the deer–a flick of an ear, a glint of sun on an antler tip, an off-color “rock.”

Not just any clearcut will hold blacktails; the growth has to be just right–high enough to give the buck cover and make him feel comfortable, yet open enough to actually see deer. The good thing about clearcut country is that there are lots of logging roads for hunters to walk and landings that provide good platforms for glassing. Bucks also frequently bed below landings, so listen and watch for one at close range as you walk out to the edge.

While you don’t read much about rattling for blacktail deer, it’s a tactic that can work during pre-rut and the rut itself. Like other deer, blacktail bucks do lose much of their wariness during the rut. The western Oregon general blacktail season, for instance, usually runs from late September to early or mid-November. The latter part of the season often coincides with pre-rut, and the archery and muzzleloader hunts often fall during the peak of the rut.

Blacktail deer are not large; live weights for mature bucks normally run 120 to 140 pounds. Like with other deer, weight can vary drastically, and a very big buck might go 200 pounds or more. An ideal all-around blacktail rifle might be a flat-shooting .25-06 Rem. or .270 Win. The 6.5×55 Mauser, 7mm-08 Rem. and other cartridges of this ilk are all good choices for blacktails.

If you’re a still-hunter, a fast-handling lever-action carbine in .30-30 Win. carries well in the brush and shoulders quickly. A receiver peep sight is fast and not as susceptible to rain as a riflescope.

Blacktail numbers often run high in good habitat. There are plenty of them around. Seasons can be liberal, and permits are usually readily available. In Oregon, for example, you can purchase a blacktail tag over the counter. Add to this fact that there is plenty of rugged country to get away from other hunters, and blacktail deer hunting is an often-overlooked opportunity.