How to Hunt Turkey in the Fall: Hunting Tips for Beginners 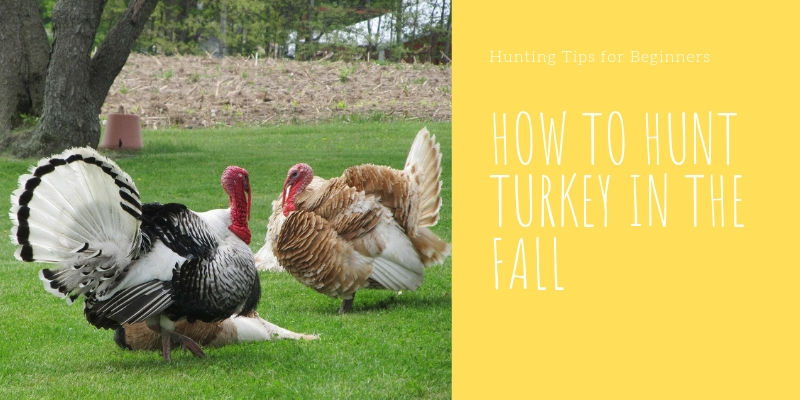 I’ve been chasing turkeys since I began hunting at age 12, and while I get a big thrill out of working a boss gobbler in the spring, the fall season is perhaps my favorite.

For one thing, you can hunt all day–unlike in the spring, when, at least in the East, you have to quit around lunchtime.

The opportunity to hunt from sunup to sundown allows for a more relaxing and enjoyable hunt. Or, depending on how badly you have turkey fever, it gives you more time to scour the woods like a madman in an attempt to kill a bird.

Fall hunting also permits a wider range of hunting options, from running and gunning for flocks to still-hunting along a ridge for a chance at both flocks and lone birds–maybe even an old gobbler.

During the fall, turkeys are gathered into flocks–typically made up of several hens and their broods from the current year’s hatch.

These mixed-family flocks can number from a dozen birds to several dozen, and flocks of 100 turkeys aren’t unheard of in good habitat.

It’s also possible to locate what may be perhaps the most challenging game animal of all: lone, boss gobblers that shun company altogether.

Food is the turkey’s primary motivator in the fall. To find birds, it’s imperative to locate the right food sources.

Because poults depend heavily on insects throughout the summer and into fall–and adult birds dine on them, too, for their high protein–grassy fields are one of the most reliable places to locate flocks up until the first hard frosts kill off grasshoppers, crickets and the like.

Driving back roads and glassing fields with binoculars will give you a good head start on finding birds.

Of course, other people will have seen these turkeys, too, so a better bet may be to hike into remote forest openings, right-of-way strips created by power transmission lines and gas pipelines, and old, grown-over logging roads that no longer see vehicle traffic. Wild turkeys will use all these in their search for insects.

At the back of each of these is a pile of leaves that appears almost rolled into place. It’s possible to determine a turkey’s direction of travel from scratchings by looking at where the leaves are piled; turkeys push the leaves behind them as they scratch.

It’s fairly easy to discern fresh scratchings by a lack of leaves on the exposed ground and the moist appearance of the soil. During windy periods or heavy leaf drop, scratchings disappear quickly as leaves cover them.

That’s both a blessing and a curse because visible scratchings will likely be quite fresh, but it will be difficult to determine areas that turkeys that have been using during previous days or weeks.

Turkeys prefer to roost in large trees with thick limbs, and they like to stay out of the wind at night. So look for roost sites in protected hollows rather than on the tops of ridges.

Preferred roost sites will reveal themselves by the concentrations of droppings on the leaves below. In inclement weather or extreme cold, head for stands of conifers such as hemlocks and pines, which provide protection from the elements.

Obviously, the best turkey hotspots will feature a mix of these ingredients in relative proximity. In other words, if you can find mast-producing trees in an area that features a reliable water source, some grassy openings, and large trees for roosts, you can bet the turkeys will be there. 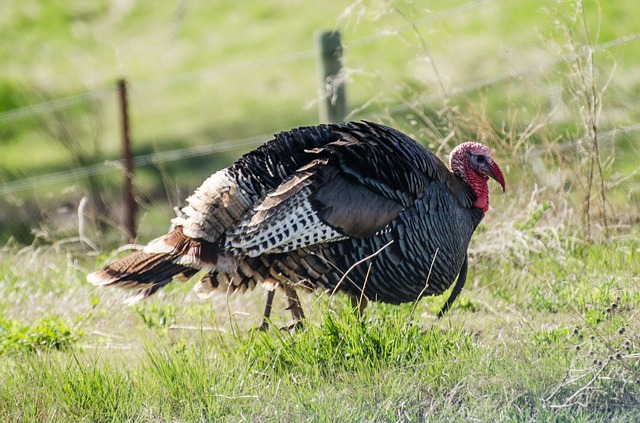 From breaking up flocks of young birds to sneaking to ridges in search of old gobblers, fall turkey season accommodates a variety of hunting styles.

Once your scouting has produced turkey sightings or sign, the next order of business is to bump into a flock. The goal is to get close enough to scatter the flock to the four winds. Then you situate yourself at the break-up point and call to the reassembling birds.

Best Time to Locate Turkey in the Fall

One of the best times to locate turkeys is right at daybreak. When a flock of turkeys–especially one that hasn’t seen much pressure–wakes up in the morning, it makes a hell of a racket.

The jennies whistle and whine, the jakes yelp and try to gobble, the older hens yelp loudly. It’s a sound you won’t soon forget, and it’s one you can hear for a fairly long distance.

If you can reach such a flock before it gets too light, you can flush the turkeys from the trees. In the poor light of pre-dawn, you can get birds flying off separately to all points of the compass.

That creates a good break and a solid chance to call one back and shoot it. Of course, you can also wait until the turkeys fly down and gather on the ground–then rush in and break them up.

Evening is also an excellent time to locate fall birds. Turkeys don’t like to roost by themselves, and birds that have been separated from their group are often desperate to find company right before fly-up time.

Now, if you split up a flock right before dark, don’t expect them to come charging right back. It can happen, but it’s more likely that they’ll try to reassemble in the morning. However, evenings are a great time to call turkeys that were split up earlier in the day.

I learned this firsthand one opening week in Virginia when I’d hunted all day in vain for a flock that I knew was on the mountain. It was nearing dark, and I was still a couple of miles from the truck.

I began a forced march, calling loudly and incessantly as I worked back along the ridge.

About halfway out, I got a loud, shrieking answer. I dashed to the nearest large tree while still calling and got into position. The bird originally sounded as if it was at least 150 yards away in a hollow below me; minutes later, though, the jake–calling nonstop–popped into view.

He was running full bore, yelping and kee-keeing desperately, straight toward me. When he got to within 25 yards, I fired–and missed.

The point is, that bird had been separated from its brethren and, with night approaching, he wanted to get together with another turkey–and fast.

There are two approaches to the rest of the day. One–running and gunning–is a good method to use in unfamiliar territory that you haven’t had a chance to scout; where mast crops are heavy and widespread; and in areas that get lots of hunting pressure.

In this strategy, you cover a lot of ground until you find fresh scratchings, then follow them in hopes of catching up with a flock and effecting a scatter.

Make sure you stop frequently to listen.

While you won’t always hear the sound of turkeys calling, scratching turkeys make a ton of noise when the forest is dry.

Heavy mast years are a boon to turkeys and other wildlife, but they can be tough for turkey hunters. With food readily available over large tracts of land, there’s nothing to concentrate the birds or to hold them to a pattern.

In such a case, your best bet is to log a lot of miles. Pay attention to where you’re finding turkey sign and try to determine what type of food is drawing them at that point in time.

For instance, wild grapes–a soft mast that doesn’t persist for long–will often draw turkeys. If you note that birds have been working the grapevines, and you know the location of other grapevines, hit them in succession.

Likewise, if the woods are full of a variety of mast sources but you continually discover scratchings in beech groves, concentrate on beeches to find birds.

Don’t neglect agricultural areas and old fields, either. You may find that even though turkey sign is scattered throughout the forest, the presence of insects–or waste grain in recently harvested fields–may attract turkeys on a more regular basis.

In places where turkeys are hunted regularly in the fall, the run-and-gun is a good way to find lone turkeys looking to reassemble. Hunters flood the woods on opening morning, and sooner or later someone is going to run into a flock and break it up. Other hunters subsequently encounter smaller subgroups and scatter them.

Each time this happens, the hunter or hunters who split a flock will sit down to call them–but not all the birds are going to be able to reassemble. Some will invariably be bumped by other hunters, pushing them farther from the reassembly point. These singles, doubles and trios will wander the woods and are often ripe for the hunter who’s covering ground and calling a lot.

The run-and-gun is a great strategy, but I also like to still-hunt through an area that I know holds turkeys–moving 50 to 100 yards at a time and then setting up to call for five to 10 minutes. When still-hunting for turkeys, I don’t sneak but rather walk in a series of quick steps, two or three or four at a time with a short pause between series. I’ve found that this pattern, or lack thereof, tends to spook wildlife less than creeping quietly or walking steadily. The pauses also allow me to listen for the sound of calling or scratching turkeys.

Depending on wind strength or the amount of turkey sign I’m seeing, I’ll move in this manner for 50 or 100 yards and find a good tree to set up against. After sitting quietly for a bit, listening, I make a single, loud cluck on a box call. If the cluck doesn’t bring results, I begin yelping–increasing the volume a little with each series. The response, if any, isn’t always a call; sometimes, the only indication that the turkeys heard you will be the sound of them marching your way. If nothing happens after 10 to 15 minutes, get up and move another 50 to 100 yards.

Still-hunting for turkeys requires an intimate knowledge of the hunting area and a good idea of where the turkeys are–otherwise you can spend a lot of unproductive time calling in places where there are no turkeys. When the tactic works, though, it gives you a shot at big flocks, small groups and singles, and occasionally–when fortune smiles–a boss gobbler.

Fall gobblers are tough, largely because they aren’t terribly social and don’t have sex on their minds. You’ll sometimes find them in small bachelor groups–pairs or trios–and these represent your best shot. If you can locate such a group and split it up, it’s possible to call the toms back. Be aware, though, that old gobblers will take their sweet time reassembling. They may wait a day or more before returning to the break-up point.

Solo gobblers are even tougher. The closest I ever came to killing a lone tom was during a still-hunt in late fall. I’d stopped to call, and moments after my first cluck, a gobbler with a thick, 10-inch beard walked down off the ridge and stood 50 yards away. He scratched, fed and looked around for a few minutes, then drifted off–and I couldn’t entice him back.

It was one of most exciting moments I’ve ever had in turkey hunting–an unexpected bonus so close and yet so far. And it’s the kind of action that draws me back to the fall woods year after year.